GOOD theatre, I would always say, gets you feeling all the feels, writes Helen Kerr.

I’ve seen some tremendous productions over the years – from the West End and Broadway to the black theatre box at a local college. From glorious musicals to passionate amateur productions to the earnest recitals of excited school kids…some theatre is good for the escape, or the history lesson…maybe the only gain is your own beaming child who is so happy to see you they forget who they are supposed to be playing up there…

I’ve truly felt all the feels over all those years.

But some feelings are better if they don’t leave you. Because they have gripped you to the very core with urgency, or with a call to action. They leave the marks they are supposed to because what you have seen, what you have witnessed, steels in you something determined to make our fleeting time on earth somehow better.

That is what Islesburgh Drama Group’s most recent production does to you. Written and directed by Stephenie Pagulayan, Fragmented is a heart-rending look at the life of Evelyn whose experience of sexual abuse as a child has shaped her in ways she would never have imagined. Based on real experience, the play was presented by Shetland Arts, in collaboration with Shetland Women’s Aid and the Compass Centre: Fragmented is a theatrical accomplishment.

A simple set, designed around the apartment of the grown young woman Evelyn has become doesn’t change throughout. Although if ever there was a play where the set was superfluous, this is it. We can situate Evelyn where she is most comfortable, but the mesmerising performances of the three lead actors were such that if the set had been a pile of cardboard boxes, you wouldn’t have even noticed.

From the outset, Evelyn was captivating as a character. Played by Nicola Fleck, who debuted with Islesburgh Drama Group in this performance, Evelyn is clearly in therapy of some sort. An official looking Emma Webb played Dr MacDonald, whose presence on the set added a stylised, narrative element to the unfolding drama, asking the necessary questions to lead Evelyn to search herself and retell her story to the audience. The one act play was structured between these sessions with the doctor, flowing seamlessly from her counsel to the re-enactment of Evelyn’s life. 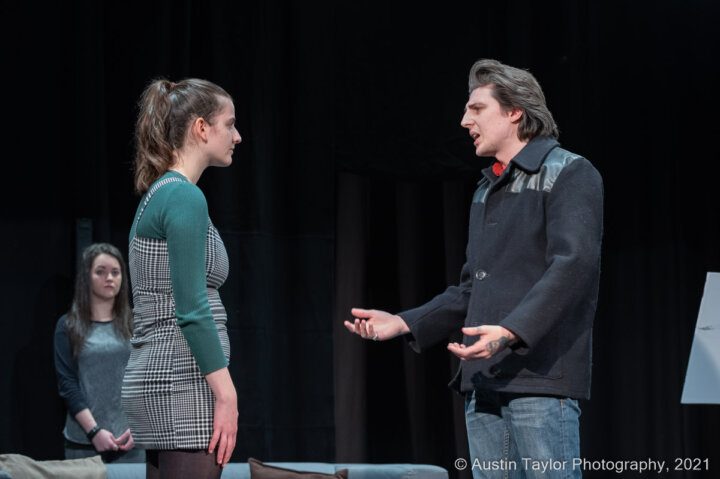 On the face of it, Evelyn leads an ordinary life. Maybe even a fairly boring one. One like you or I could lead. She has a place to stay, appears to have employment that enables that. She is a well-presented young woman, enjoys a drink here and there, has a man who is interested in her…what on earth could be wrong?

To start with, it’s not crystal clear.

The appearance of two female characters – Ivy and Seraphina – leads you to consider the other women in Evelyn’s life. The vibrant, tenacious Ivy who comes to Evelyn’s flat to paint and laugh and dance and drink…she seems like the friend we might all enjoy having. A little bit wild, a little bit free, but somehow deeply connected to Evelyn’s welfare. Donna-Marie Leask plays the part of Ivy – and honestly, is there a part Leask cannot play? With conviction and depth and ferocity, her performance brought some light moments and smiles as we wondered about her connection to the timid and grey Evelyn.

Then there was Seraphina – another Islesburgh Drama Group debut performed by Laura Bisset. Where Evelyn is ordinary, Seraphina takes that to a new level. Pernickety and pedantic, Seraphina tidies, and cleans, and fusses – she is poised and careful in her dealing with Evelyn. Perfectly turned out and missing nothing, Bisset played her character with the aloofness of a friend who might always love you but think at the same time you might always be able to do a little better if you just tried a little harder. Again, in some ways an unlikely companion for Evelyn, who seemed disinterested in pursuing the perfection that came so naturally to Seraphina.

Then there was the arrival of the mother. The anxious dread of this woman visiting was palpable. This was, for me, the turning point. Ivy remained, almost like an apparition, on the set while the overbearing mother paraded in, determined to decorate Evelyn’s flat with bright colours. Her lack of acceptance as to who Evelyn had become couldn’t be mistaken.

Performed by Morag Moaut, Marion was both vivacious and alarming. The sort of mother you might secretly want and yet at the same time be secretly glad she wasn’t yours! And yet there was Ivy. Lurking somehow. Honestly, at first I didn’t understand it. How could this mother just waltz into the apartment and totally overlook this spirited friend of her daughter? But there was something in Ivy’s face – the hold-your-breath pause that made her suddenly ethereal and other-worldly…

And then Richard. A young man whose interest in Evelyn is reported to her constantly by Seraphina but then – the horror – it is Seraphina dating him? Now the confusion is real. These girls, these connections, these relationships…

It’s then we realise that these are all parts of fragmented Evelyn. They are not real women in of themselves, but they are real parts of dismal, lacklustre Evelyn. In coping with her trauma, she has fragmented herself into parts – those she wants to be? Would rather be? Hopes to be?

Fragmented goes to some hard places. Pagulayan hasn’t played this one out to be easy on the ears or the soul. And neither should it be. There are stark realities for many more women than we would wish to count when it comes to the narrative that frames child sexual abuse and attempted suicide. It affects too many women. Every. Single. Day.

This is one of the reasons why Fragmented is powerful stuff. Simple staging. Simple lighting. But driven by powerful writing and delivered by powerful performances. Every emotion Evelyn felt was wrought on Fleck’s face. You can’t help but go there with her. Into all the darkness. But out again. Fragmented doesn’t take you to the hardest place and leave you there. Out of attempted suicide and finally being able to talk to her mother, Evelyn discovers the hope that can come from survival.

This is where we lean in. This is where we listen and where we learn. It’s where we acknowledge that this is a living reality for children, for women, for men in our own lives and communities. In a Q&A after the performance, procurator fiscal Duncan Mackenzie discussed the necessity of calling out bad behaviour – taking our part seriously in making sure we do what we can to protect those in our care, in our homes, in our lives…

There’s a line in the play where Evelyn reflects on ‘papering over the cracks’. Getting by in life by pretending that what lies underneath isn’t really doing any harm.  We can do that. Be thankful that maybe this wasn’t our experience. Be hopeful it never will be. Or maybe we can peel the paper off. Do our bit. Call out the bad behaviour. Love our neighbour.

Most online publishers have started charging for access to their websites, others have chosen a different route. Shetland News currently has  over 530 supporters  who are all making small voluntary financial contributions. All funds go towards covering our cost and improving the service further.

Three drivers banned from the roads

Health board dealing with around 20-30 Covid cases a day

Kergord batching plant may no longer be needed

High time for some scrutiny

‘Is this what we wanted?’

Shetland should be compensated

No need for a Shetland Tariff

Better use of active travel funds

Three drivers banned from the roads

Health board dealing with around 20-30 Covid cases a day

Kergord batching plant may no longer be needed

Councillors can help industry 'capitalise on direction world is going in'

Energy firms accused of being uncaring towards customers amid price hikes

High time for some scrutiny